That's What She Read

she is too fond of books, and it has turned her brain.

Y’know, I’ve decided to stop apologizing for how “late” these reviews are. First of all, what makes them late? The fact that I finished the book nearly a month ago? I’m not on a set schedule; I don’t get paid for writing these in a “timely” “manner.” And look, seeing as how I’m currently struggling through The Mysteries of Udolpho to the point where it’s taken me six weeks to read three hundred pages, I don’t think I’m going to finish that before I finish at least a couple more of these. So without further ado, here is my next review.

(I’m also not going to apologize for using quotation marks as finger-quotes.)

A few months ago, Erica of NYC Bookworm had read The Eyre Affair. I had read that book a couple of times in the past (all predating That’s What She Read), and I was about to offer my insight when … I couldn’t find my copy. Anywhere. I had the next two books in the series in my bookcase, but not the first one. What? Did I lend it to someone who never gave it back? Is that person reading this now? Are they realizing that yes, they do have Alaina’s book? Are they feeling guilty about possibly never reading it? Are they?

Well, don’t worry about it. Because God bless Bull Moose, you guys – not only did I find another copy of The Eyre Affair there, and not only was it on sale for $2.97 (!), but it was also a hardcover (!!) in fantastic condition (!!!). Seriously, if you live near a Bull Moose (Mainers and New Hampshire-ites only, sadly), you should totally go to there.

Now, I would almost classify The Eyre Affair as science-fiction. Almost. There are sci-fi elements (cloning, travel between both time and space), but it still feels like literary fiction to me. I’m not sure I can explain it better than that. So for those individuals who can’t “get into” sci-fi, I still think you should give this book a chance, because I don’t find the sci-fi elements to overpower the rest of the story. [Note from the future: this statement turns out to be a lie.]

In the universe of The Eyre Affair, it is the late 1980s in Britain. Britain and Russia have been involved in the War for the Crimea for nearly a hundred years, and almost every able-bodied character has done their tour of duty in the war-torn region. Upon discharge from the Army, Lt. Thursday Next has gone into the Literatec police – one who investigates literary crimes, such as copyright infringement, counterfeit manuscripts, and complaints about how a book ends.

In this universe, the Brits take their literature seriously. Very seriously. There are museums dedicated to famous authors. I want to say that Shakespeare’s birthday is treated as a national holiday? (I say “I want to say” because I wrote this draft longhand at work on my breaks and when this database I’m working on gets boring, and also, I … may have misplaced that book again.  Goddammit. [Note from the future: this statement also turns out to be a lie; I found the book when I got home. Hooray!]) There is a theater in Swindon where everyone goes to reenact Richard III. As in, every person in Swindon knows every word to Richard III, and can play any role at any time. If that’s not a Shakespeare nerd’s dream, I don’t know what is.

Thursday is stagnating as a Level 27 Literatec when she gets tapped to help capture the most diabolical villain this version of Britain has ever seen: her former literature professor, Acheron Hades. (Fun Fact!: I almost called this character Dante Hicks. I was so close, and yet so very, very far.) Acheron kidnaps the original manuscript of Charles Dickens’ Martin Chuzzlewit and attempts to hold it ransom. Thursday helps the other Special Ops department (SpecOps for short), and in the ensuing stakeout, well – as Paul Smecker once so eloquently put things: 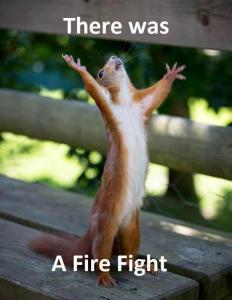 (I have got to rewatch that movie. Seriously.)

In the aftermath of the firefight — in which Thursday is rescued by a friend from her past who leaves her with a handkerchief monogrammed EFR — she hallucinates a vision of herself, driving a flashy roadster directly into her hospital room, telling herself to take the Literatec job in Swindon, her hometown.

Thursday listens to herself and transfers to Swindon, where she reconnects with her mother (who wants her daughter to get reinvolved with her ex-fiance, Landon), her Aunt Polly, and her inventor uncle, Mycroft. Mycroft is in the process of showing her his latest invention when Thursday’s called away; that invention turns out to be the Prose Portal, which pays a huge part in the rest of the story.

The Prose Portal opens a door into a work of literature. To demonstrate: Mycroft hooks a copy of Wordsworth’s poem, “I Wandered Lonely as a Cloud” to the Portal, and the door opens, and Polly is able to cross the threshold and visit the landscape and interact with Wordsworth himself. Since the poem is written in the first person, the version of Wordsworth that acts as the narrator of the poem would be in the landscape along with the scenery. Eventually, Acheron Hades comes across the Prose Portal and steals it, complete with Polly trapped inside the poem, and then hooks up the original manuscript of Martin Chuzzlewit to the Portal. He steps in and kidnaps a minor character, and then kills him, erasing him from the book completely.

See, if the Prose Portal is hooked up to a copy of a work (like Polly’s copy of the Wordsworth poem), someone can explore and interact with things but it won’t change the original work. It will be like me hooking my copy of Harry Potter and the Sorcerer’s Stone to the Portal so I can play Quidditch when everyone else is looking for the troll in the dungeon. The book is still following Harry and the gang, and since no one’s paying attention to the Quidditch field … endless goals for Hufflepuff! I mean, guys – WE COULD ALL PLAY AT HOGWARTS WITH THIS THING.

And aren’t we all just a teensy bit proud that I did not say anything about hooking The Silence of the Lambs up to the Prose Portal, considering my show comes back in FIVE FREAKING DAYS?!!

Okay, maybe I lied about the sci-fi elements. I’ll admit, walking through a door into a book and stealing the main character and having all copies of the book simultaneously lose the rest of the book is pretty out there. It’s also pretty freaking cool, but still very weird.

I should also mention that, in this universe, Jane Eyre has a different ending. (For reference, check out my review [or, rather, recap] of Jane Eyre from when I read it back in 2011.) In Thursday Next’s version, Jane does not return to Rochester at Ferndean; she goes with St. John to India. Bertha Mason does not burn the house down, and Jane does not hear a voice calling her from across the moors. You can probably guess, however, how this version gets changed into our version; it involves the Prose Portal, and Thursday crossing the threshold to help out.

Two things and then I’m going to start rewatching Season 2 of My Show:

1) How much do I adore Edward Rochester? SO MUCH. Look, I admit that I do need to reread Pride & Prejudice and I’ll get right on that (not). But given a choice between Rochester and Darcy, I’m going to take Rochester every fucking time. Rochester is broody, sarcastic, experiences emotions deeply, and can be very loving. Darcy is a snob who, admittedly, comes to his senses, but he professes his love in a letter, whereas Rochester eventually confesses in a thunderstorm. Granted, if Rochester was played by Colin Firth, we’d have what is known as a win-win situation. But seriously: ROCHESTER.

And in The Eyre Affair, we see an even better version of Rochester. He’s still broody to Jane and Adele, but when Jane’s narration takes her away from Rochester, he is charming and helpful to Thursday. He is a valuable ally and friend to Thursday. Basically he’s awesome, and just reinforces my belief that Virginia Woolf continues to be wrong about Jane Eyre being a lesser novel to Pride & Prejudice, even this long after her death.

2) Similar to how Bridget Jones’s Diary took a modern spin of Pride & Prejudice, Thursday Next is not without her Jane Eyre-esque love triangle. She finds herself enjoying herself with Landon, even though she’s not sure she wants to get back together with him. Meanwhile, her partner in the Swindon office, Bowden Cable, is clearly set up to be Thursday’s version of St. John Rivers. And that should tell you who she ends up with, so yay, mystery solved!

Overall, I really like this book. It has such an interesting take on a very unique universe (oh crap and I didn’t even get into the whole War with the Crimea and weapons advancement and — oh well, read it yourself!) — I just want to go to there and live.

Preferably in a version with my own Rochester. I’m just saying, if I’m wishing, I might as well go big or go home.

Grade for The Eyre Affair: 4 stars